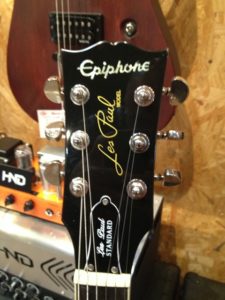 A couple of weeks ago I have found, in my favorite guitar shop in Shanghai, some strange Epiphones, two Les Paul (one Special and one Standard)  one 339 and one SG that instead of the normal Epiphone  headstock had the traditional open book Gibson headstock. This is pretty unusual, Epiphones with Gibson headstock in the past have been produced only for japanese market and even those models had a little different variation. The headstock shape nothing has to do with the sound of the guitar, I just want to clarify it, but it can play a role in the general appeal of the instrument, many Epiphone players, that consider these instruments very well, express a strong dislike for the normal Epiphone headstock and in some case an esthetic element can reduce the level of satisfaction that the guitar can give to the player. When I discovered these “stange” Epiphones I wrote a post on mylespaul.com and a debate started. Read all for the rest of the story and a photo gallery of the Les Paul with Gibson headstock

I know the shop very well, since 2006 it is my favorite, I even go there time to time to chat with the owners, they are honest and hard workers, year after year they got official dealership form all the major brands and distributor, now in the same road they own 4 shop, the main one and 1 dedicated to Gibson brand, one for Yamaha and one for S.Yairi. I was 100% sure those guitars could not be fakes, fake guitars disappeared from the shop in Shanghai, chinese do not like to buy fakes, fakes are made to be sold on ebay to western people.

But still I was confused because Epiphone with Gibson headstock was a totally new concept for me, so I wrote a post on the my Les Paul forum, and you can read the generated thread at this link.

I linked in the post the page of the online shop, to show some pictures and let the other users gather more information. Of course at the beginning some reactions have been the expected:” they are fake”, hey I was expecting this, but I was surprised that some users took time to search the name of the shop and find some official confirmation that this shop is an authorized dealer for Gibson and also in the past have been awarded by the company. Some users start to find some elements that was leading to suspect that maybe the guitars were legit, it was very interesting to see how the debate was developing and at the end  somebody  wrote directly to Gibson, linking the e-shop. After few days the answer from Gibson arrived:

Ok, finally all doubts vanished and we got the confirmation that these Epiphone are legit and genuine!!

I thanks all the forum members that participated to the thread!!!

I was thinking to buy the Les Paul Standard, the price was extremely intriguing, but also I needed a bass to play with my band (because we got 2 new guitar players but it is almost impossible to find a bass player i decided to switch to the bass)

I went to the shop to try it and with the option that if it was not love at first sight with the Les Paul I was going to buy the bass.

The guitar is very decent, same level of the normal Epiphone standard, pickups are uncovered and cheap but they sound ok, nothing special, can be changed. The setup from the factory is also ok.

I have found only one defect that is related to the Pickup Rings, seems that the top is not curved enough and there is an empty space (have a look the picture in the gallery)

I didn’t buy it because  my Epiphone Bomamassa is so good that i don’t need at the end another Les Paul of inferior quality, that in anycase need some upgrades to shine, the Bonamassa is shining already without touch anything on it and i already have a cheap Epiphone that is my Special Limited P90 TV Yellow, I love them even if they have the normal Epiphone Headstock. I took the opportunity to take some pictures that you can see in this gallery, and by the way, the bass I bought is a very nice Precision Vintage V4 that i will write about it later on. Stay tuned.

Cannot see if it is a veener

Nice grain on the neck

THis is the only defect 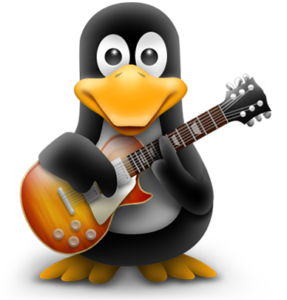